Anatomy of the Different Bong Parts

The anatomy of a standard bong can be broken down into five basic parts:

The bowl is the bulbous attachment where dried herb is loaded and combusted. It’s often removable, allowing it to function as pull- or slide-carburetor.

Most bowls come in the main sizes:

With any of these bowls, you need to remove them to create an opening that will allow you to clear bong of smoke.

Slider bowls will double as your bowl and downstem and are usually reserved for non-glass on glass bongs.

The carb, short for carburetor, is a small hole that allows the user to clear smoke from the entire chamber of the bong, completing the bong toke. The most common type of carb found on glass bongs is a pull- or slide-carb, which is exposed when the bowl is removed. Whereas older designs or non-glass bongs would include a carb-hole instead of a pull- or slide-carb.

The downstem is the small tube that allows the smoke to travel from the bowl down to the base, where it then cools down and percolates through water.

A variation on the traditional downstem is what’s referred to as a diffused downstem which compromises of multiple small holes instead of one. This helps to aerator the smoke even further, while also making a smoother, thicker, and cooler smoke. 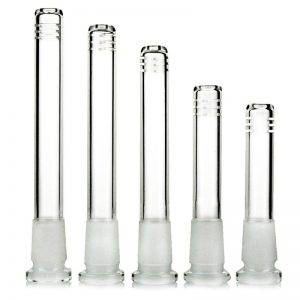 Like diffusers, percolators help to aerate your smoke further.

Aerating the smoke breaks it into smaller bubbles, creating a larger surface area of smoke to be cooled by the water.

Some of the common types of percolators:

Ash catchers are a great added attachment to any bong which acts as an extra chamber in between your bowl and your bong that works to catch the majority of ash.

This helps to keep your bong cleaner for a longer period. Most ashcatchers has percolators contributing to an even smoother smoke. 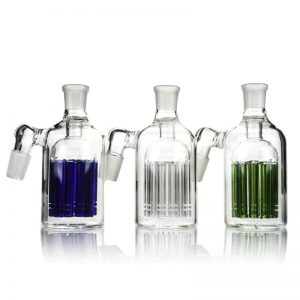 The base is the bottom of a bong and can take many shapes, depending on style. A bubble- or beaker-shaped base is often used to create the water chamber in which the smoke cools as it passes through the water.

The tube, which ends in the mouthpiece, is the chamber that fills with smoke after it has filtered through the water. Other features, such as an ice pinch, are often included in the tube design.

All these parts can take various shapes, colors, and designs depending on the bong’s intended function. The downstem is often replaced with or attached to a variety of percolator designs that offer more diffusion or separation of the smoke as it passes through the water chamber. 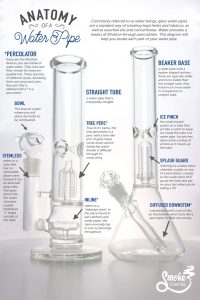